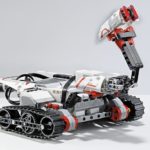 Did you know that the existence of electricity was first discovered by the Ancient Greeks but scientists didn’t discover how to produce an electric charge until 1800? Become a physical scientist! Learn the physics behind conductivity and circuitry, the principles that allow robots to function, with Makey Makey. Design a complete electrical controller with unexpected items – like playdough, bananas, or liquids – and use it to control a LEGO creation! 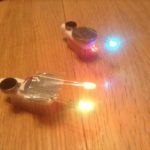 Did you know that people in 1900 thought that we would have personal robots doing all of our tasks (sweeping, grooming, shaving) by now? We haven’t quite reached that level, but it is a lot more feasible today than it was back then! Become a robot engineer, and see what tasks your bots can do for you. Construct a variety of LEGO EV3 robots. Build your own transforming solar-powered bot! With four different modes, the missions that your bot can undertake are endless!

Transform yourself into a life-size robot! Create a robot headband, and learn to speak like a robot. Play a game of Roll-A-Robot, and see what kind of robot the dice will lead you to create. Construct your own robot from common recycled items. Lastly, design a planter with a beloved movie robot in mind.

Embrace your inner robot! Compete against your peers to follow commands and complete a robot in record time. Practice your robot moves and sounds in a riveting game of “Robot Tag.” Race to the nearest charging pad to keep your battery from losing all power! Work with your team to steal the robot’s treasure, and take on the role of human and robot to see which “species” can win the game. 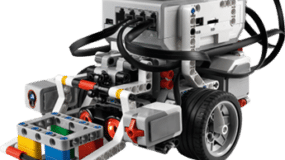